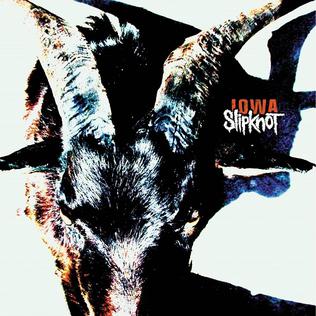 Iowa is the second major label studio album by American heavy metal band Slipknot. Released by Roadrunner Records on August 28, 2001, it was produced by Ross Robinson and Slipknot. The title derives from the band’s home state, Iowa, which members have stated is one of their biggest sources of inspiration. With much anticipation for the band’s second album following on the success of their 1999 self-titled debut, pressures on the band were high. Their relationships with each other suffered and was later described as the darkest time of their career. It was also the first time that guitarist Jim Root had been significantly involved in a Slipknot album due to his joining very late in recording of their debut album, as Root was only featured on two songs from that release. Despite troubles within the band and with Iowa’s development, Slipknot promoted it for almost a year.

Iowa was a major success, premiering in the top ten album sales charts in nine countries. Generally positively received, it includes some of their notable songs, such as “Disasterpiece”, “The Heretic Anthem”, “People = Shit” and the two Grammy-nominated songs “Left Behind” and the remix of “My Plague”. Critic John Mulvey proclaimed the album as the “absolute triumph of nu metal”. While more technical than their debut album, Iowa is considered to be the band’s heaviest and darkest. It has been certified platinum in the United States and Canada. A special edition of Iowa was reissued on November 1, 2011 to celebrate the tenth anniversary of the record. It was accompanied by a full live audio of the hit DVD Disasterpieces and a film entitled Goat directed by Shawn Crahan with the four music videos, never-seen-before interviews and footage from the Iowa period.